April FX outlook – US tax reform and French election
After the failure of the Trump/GOP healthcare bill the next focus is on the Republican tax reform proposals, which may well be outlined more clearly by the end of the month. With the USD having weakened a little over the last month and having failed to benefit even though the Fed raised rates again in March the focus on “Trumpflation” has if anything increased. The lack of significant action from the administration is generally seen as the main reason for the lack of USD progress, though the US data has also been mixed. This month also sees the first round of the French presidential election, which is likely to have some impact on European risk appetite.

Outlook for April
1) The Trump and Republican agenda
The failure of the healthcare bill is significant mainly because it throws into further doubt the ability of the administration to implement the program they have outlined. The USD gained on expectations of “Trumpflation” after the election result, but it has now reversed most of its gains since the election, even though the Fed raised rates in March, which had not been expected after the December rate hike. There is still potential for the USD to make ground on stimulative policies from the Trump administration if they come to pass, but the confidence in the administration’s ability to get things done has been hit.
Six-month USD Index: 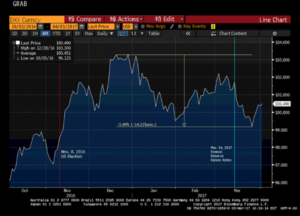 The focus will now be mainly on the proposed tax reform. This is still very much an area of negotiation, as there are a variety of different versions of the tax reform that are possible. One of the most contentious aspects is the Border Adjustment Tax (BAT), which is part of the most radical proposal. This would remove tax on exports but increase tax on imports, and is consequently very unpopular with most retailers, as well as with those worried about the inflationary consequences and the consequent impact on real incomes.

But if a budget reform is passed it is likely to be USD positive, with or without the BAT. Most expect the imposition of a BAT would lead to a higher USD to offset the impact of the BAT on import and export prices. However, a tax reform without a BAT would likely be expansionary in the short term (because the BAT is revenue earning) and would consequently lead to an increase in market expectations of Fed tightening and higher US interest rates. The main danger to the USD is therefore that the administration fails to agree on or pass a significant reform. While the Fed still seems confident that the economy is on track and expects to continue to tighten, another policy failure would dent confidence and would likely lead to lower US yields as the market started to doubt the scope for Fed action.

However, the Trump administration could also have a more direct impact on the USD. Trump has always been clear that he thinks the USD is too strong, and has threatened to deal with “currency manipulators”. Some of the USD decline this year has been because of the perceived end to the “strong USD policy” that this stance implies. Recent reports suggest the administration is considering using the Trade Enforcement and Trade Facilitation Act details to address the issue. The Act details several consequences for nations that have devalued their currency and have large current account surpluses. It allows the president to block future federal contracts with those countries and to choke off government financing for U.S. businesses seeking to invest there. In practice it seems unlikely that this will affect the major currencies, but the opposition of the administration to a strong USD does suggest substantial USD gains will prove difficult.

2) The French election – first round vote April 23rd
The French presidential election is the next focus for those monitoring the rise of populism in Europe. The Dutch general election if anything represented something of a reverse for the right wing populists, with Geert Wilders underperforming relative to pre-election expectations. Marine Le Pen carries the right wing torch into the French election, and is expected to win the first round with around 26% of the vote. But the first round only determines who moves through to the final second round run off on May 7th. The polls suggests that while Le Pen may well win the first round, she will gain very few extra votes in the second round and will be comprehensively beaten by Emmanuel Macron, the independent candidate who is expected to contest the run off with her. While many distrust the polls after the Brexit and Trump victories last year, the predicted margin of the Macron victory is much wider than was suggested for “Remain” in the UK and Clinton in the US. So although the political betting odds suggest around a one in five chance of a Le Pen win, this seems to be an overestimate based on the poll standings. An eventual Le Pen defeat would likely give the EUR a modest lift, as it would eliminate any chance of any French move to leave the EU anytime soon. But a Le Pen victory would be substantially EUR negative because of Le Pen’s promises to renegotiate France’s position in the EU and potentially hold a referendum on membership. Similar if less dramatic effects can be expected in response to Le Pen’s performance relative to expectations in the first round.

3) Brexit – the negotiation
While the UK has now started the Brexit process by triggering Article 50, the market awaits the start of negotiations. The EU wants the terms of the divorce agreed before any trade deals are considered. Even this negotiation won’t start until after the French election (second round on May 7), so progress looks unlikely to be particularly rapid.

EUR/USD
EUR/USD made modest gains through March against a generally softer USD, helped by solid European data and some rise in expectations of a tightening in ECB policy by the end of 2017. However, these expectations faded with weaker than expected inflation data at the end of the month, taking the EUR off its highs. The French election will probably be the main focus for April, though the first round is very unlikely to be conclusive. News on US tax plans or a surprise from the French first round will probably be needed to trigger a break of the 1.05-1.09 range that has held since mid-January. The European economic data has been strong enough to suggest that unless the first round of the French election shows a big increase in Le Pen’s chances of victory the downside is well protected and an upside break looks more likely near term in the absence of significant news from the US, though progress beyond 1.10 still looks unlikely. 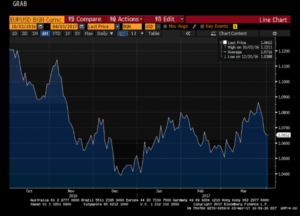 GBP/USD
The triggering of Article 50 has started the Brexit progress, but in reality very little is likely to happen on this front for a month or more. GBP will therefore tend to focus on UK data and the possibility of a UK rate hike in May, following the surprise vote for a hike from MPC member Forbes in March. In our view, a hike is unlikely but the market may not see it that way just yet. Also in GBP’s favor is the very large speculative net short GBP position outstanding in the futures market. In the absence of news this seems likely to be reduced, suggesting an upward bias to GBP/USD. 1.20-1.28 looks like the effective range for now, with the upside looking more likely to be tested near term. 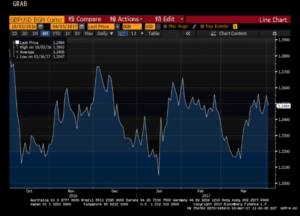 USD/CAD
After seeing early weakness, in part due to a weaker oil price, in part due to the rate hike from the Fed, the CAD finished March a little stronger. Stronger GDP data for January at the end of the month and a recovering oil price provided support, along with the generally softer USD tone following the failure of the healthcare bill. However, Canada remains behind the US in the cycle, and interest rate spreads still suggest risks are to the upside for USD/CAD as long as the Fed retains its positive view of the US economy. US tax reform is still the factor most likely to trigger significant volatility, and the major risks look to be to the upside in USD/CAD if any reform plan is agreed. There should be good support at 1.32 ahead of the main support at 1.30. 1.38 should still be the medium term target. 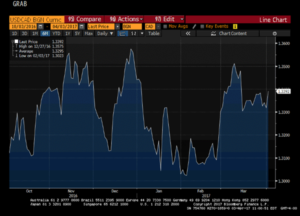 USD/MXN
The MXN was one of the best performers in March as the market lost confidence in the Trump administration’s ability to turn words into action. More was priced into USD/MXN than most other currency pairs, so the reversal has been bigger, and USD/MXN is now back to pre-election levels. But a break below 18.000 is likely to be hard to achieve unless the market prices out all prospects of protectionist measures from the Trump administration, which seems unlikely at least until the shape of the proposed tax reform is clear. 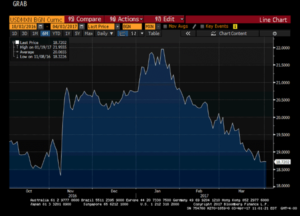 Bannockburn Global Forex, LLC is a boutique capital markets trading firm specializing in currency advisory and payment services. Our firm is purely client-oriented and our basic model is to combine expert counsel and pre-trade analytics with low-cost execution.